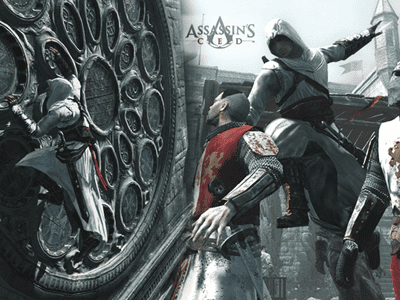 When I first thought about writing the transgression posts on killing, Assassin’s Creed was foremost on my mind. In the games you play as an assassin (first Altair, and later Ezio), who is discovering a plot by Templars to control humanity.  The assassins are cast as people who love peace and freedom, and use assassination as their tool to manipulate history.

As such, you as the player have a wide palette of verbs with which to both move stealthily and to kill.  Stealthy killing is rewarded in the game by virtue of avoiding “non-social” actions.  You aren’t seen, so you don’t raise an alarm.  This is similar to Thief and the games based around thievery that I wrote about yesterday, but it obviously brings things up a notch.  You aren’t just taking valuables, you’re taking lives. And often just because the person is in your way, or would hamper your larger meta-goals.  The assassins may have decent motives, but you don’t just assassinate big targets, but lowly, anonymous ones — and en masse, at that.

Interestingly, the stealthy killing option is often a backstab.  A quick walk up and a hidden knife, and the killed person slumps to the floor.  It’s the way you kill 90% of the time in Assassin’s Creed, yet almost no promotional shots show it.  The gameplay video for AC2 had some of that, but none of the stills.  In fact, the still above — a wallpaper that I assume is official (it certainly seems professional enough) is the only time you can see Altair or Ezio attacking someone from behind.  Even then, he’s not stealthy, and is facing a bigger fight with the guy on the right.

This points to me something odd.  It’s an acknowledgement by the makers of the game — or at least their marketers — that there’s something uncomfortable about what the game allows you to do.  Killing people just doing their jobs — keeping you off the roofs of Venice, as opposed to aliens or more dehumanized enemies.  There no expressed discomfort as in Uncharted 2, it’s just something Ezio does. Admittedly most of those murders are optional, but I found them necessary in order to enjoy the free movement of the parkour.

That certainly supports the control vs freedom narrative underlying Assassin’s Creed, but it’s interesting that denying someone else’s freedom (by killing them) is condoned by a freedom-loving group. And that the marketing at Ubisoft recognizes it, and downplays it in their advertising says that perhaps they too are uncomfortable with it.  Personally, I look forward to games without killing in them at all (but which still have humans in conflict in them — Tetris is not what I’m talking about here).

Still, all of this dichotomy sets the player up outside of normal society, giving him a liminal space to play in.  Given that gamers often feel like they chafe under society’s rules and judgement, and want the freedom to do as they will, we readily project ourselves onto our avatar in the Assassin’s Creed games.  We don the role of competent killer and climber, and go out to do those things.  Sure, there’s some sort of labyrinthine plot there, but that’s not the core of the game fun.  We are murderers, and we are ruthlessly efficient at it, and while there are certain high-up targets whose hands are not clean, we take out guards and mercenaries who are, for the most part, just doing their jobs.

Tomorrow we talk about some of those games, where we don’t kill anyone at all.  That doesn’t mean we aren’t forcing our will on them though.  Is it worse than killing them, though? I don’t know the answer to that, but we dicusss it tomorrow as we look at sex in games with “Thou Shalt Not Commit Adultery”.