Here’s an interesting thing about today’s commandment.  The proper translation of it is probably “You must not commit murder.”  Murder is different than killing, even if humans are your target in both places.  The current Catholic Church (according to Wikipedia) translates this commandment as one against killing, which is a broader term than murder. 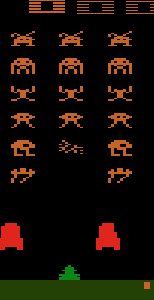 The idea is that you don’t murder your enemies in battle, you kill them.  Murdering is reserved for those of your group: members of your village, tribe or country.  Killing is something you do to Others.  Killing, ultimately, is somehow more morally acceptable because it is done to things less human than you are.  Murdering is the killing of humans.  So we cast our enemies as inhuman, so we can kill them without being murderers.

The first killing that I remember in video games was Space Invaders.   There’s nothing much more Othered than aliens, especially ones bent on your destruction.  Killing became a staple of games, every shooter everywhere, was essentially about killing.  We’v fought aliens and zombies, robots and Nazis.  And in most of these games, our enemies wind up being othered in some way.

The Border House has an interesting series on how this othering becomes racism in some cases.  I think we’re so used to “if it moves, kill it” type gameplay that we can miss this sort of thing entirely.

We’ve largely become inured to killing in games, it’s what we do, right?

In fact, I’d argue that it’s so ingrained in American culture, and the culture of gaming that just having enemies to kill isn’t enough to be transgressive, no matter what our religions or beliefs might want us to believe.  The othering of our enemies is so powerful that it’s no longer transgressive.  Add that to the list of culturally acceptable enemies, and we never really step outside of our society.  It’s kind of clear why this happens: a game were you were really a murderer is going to get a media frenzy unlike anything more than sex in a game. 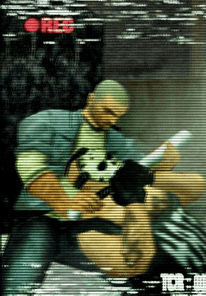 Even games which are edgier, like Manhunt, for instance, skirt this somewhat.  In Manhunt you have to kill, and kill dramatically or be killed.  That sets the stakes and moves it somewhat from murder to killing (as survival is one of those moral outs our society accepts.)  Even so, it certainly got the moral outrage of the Jack Thompsons of the world, and with some reason.

Even so, in my picture search, this was the most visceral image I could find, and look at our enemy.  He’s got a mask on — a skull mask.  He’s been genericized to be an unknown bully, and one who looks kind of dangerous anyway.  It’s okay to kill him, to choke him with a bat, even.  He’s just some random inhuman thing, anyway.

Manhunt, at least gets us out of society and into a liminal space.  The setting does that, certainly, being one that’s so contra-society.  It’s a visceral game, that could have been better.  Perhaps Manhunt 2 did it even more with it’s logic, but I admit I’ve not played that one. I didn’t play a lot of Manhunt, either, but enough to get the feel for the game.

Of course there are mainstream games which have cast the player in the role of an assassin with or without any good reason to be one.  Oblivion comes to mind here.  The player has to go out of their way to kill a named NPC (and then another one) to join the Dark Brotherhood.  Then the player goes on a series of missions where they are told to kill people.  There’ s no justification as to why — it’s what you do, after all.  Some of the people you kill may even be fairly nice.

Then, to drive home the point, Oblivion has you kill off your new family.  There’s no doubt in your mind that it is murder.  There was none in my mind when I killed M’raaj Dar and Antoinetta Marie, that I was killing friends and family.  And that wasn’t killing anymore, it was truly murder.  It made for one of the most evocative sequences in the game, because for once, the player was pulled fully into the world, and into a space where they were something different.  It’s unfortunate the game wasn’t able to do that more often — but I think transgression analysis can explain why it was largely unsuccessful. (And that’s the topic for a different post).

Are there games that really made you feel like a murderer? That encapsulated that feeling for you? How different is that for you than the generic killing in most games — and is that a problem, really?

Tomorrow, a bit more on killing.