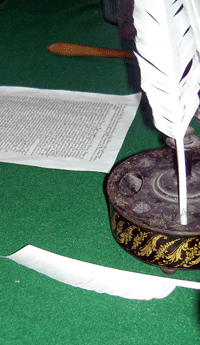 I suppose in some ways this post will be obvious common sense.  That begs the question of why I should write about it at all, but I think it took me a while to really understand it myself, so maybe this will be useful to someone else as well.  As I described yesterday, I have the dual problems of wanting to play pen and paper games and a group that doesn’t precisely meet my needs for type of game. I’d love to play a more role-played, less combat-centered game, but my group wants to get loot and that moves you into the kill/loot/sell cycle.

A lot of people will tell you that if the group and GM aren’t in sync, or if there’s a player problem then you get rid of the player.  I’ve done this — in high school — but I can’t do it now.  My wives are two of my players; another is Girl’s husband, and still another is their daughter, my GoddessDaughter. I only have two choices: accomodate them, or not play.

I suspect that’s why I’ve been hesitant to game again.  The last time we gamed, playing D&D 4e was pretty awful — for me as a GM and for my players, as well.  It was even more about battles and the looting has become more like shopping, as you have a list of things the players want and you place them there to find when they kill the monster. It doesn’t make a lot of sense to me, and the combat really doesn’t support the attention span of my group.  Or keep me interested.

That’s when I realized I was going about it wrong.

I could adjust how the games played, because, ultimately, I’m in control of what sorts of challenges happen.  It could be any sort of thing, and I could modify it so that it fit the needs of my group, including myself.  That’s when it hit me: every Game Master, Storyteller and Dungeon Master out there is a Game Designer.

They’re a very lucky game designer, actually.  They actually know the players they are designing the game for. They can know exactly what they want, and provide it.  That, of course, got me to thinking about my players, and the frustrations that I had with the last game we played.

I’m not entirely sure who my player contingent will be, since I was asking for more players yesterday.  But for now, we’re talking about my wives Tam and Girl, Girl’s husband Moonwyrm and his girlfriend, and our Goddessdaughter.  Moonwyrm’s girlfriend, K, has a rotating schedule, so she won’t be there very often.  We have a couple of smokers, who take regular breaks — in 4e that often meant several breaks during a single combat.  And then there’s me, who doesn’t really like running combat much, and in crunchy systems like D&D not much at all.  But that’s what we’re stuck with, for now.

Limitations are the source of creativity, though, and these limitations sort of rumbled around in my head.  There’s a big difference form the assignment ‘make a game’ and ‘make a game about bean farming’ (to borrow Brenda Braithwaite’s example.  Even more specific is even better: “make a co-operative race game about bean farming.”  That’s so specific that now ideas are popping into my head, and I just made that up.  So I need to do that same thing with my gaming group.

I need something that can be done in easy chunks, where if someone isn’t there, they won’t be left behind.  I need something that’s not too complicated, and is rated no higher than PG-13, and probably with a G-rated plot, since we have a seven year old with us.  I need something with interesting character and story for me (and truthfully, my players like that too).  There have to be dungeons and loot.  Combats should be short, and we should be able to walk away at any point and come back with a slightly different group a n hour or week or more later and still know what is going on.

That rumbled around in my head, and as I was on vacation, playing Zelda on my DS, these ideas clashed together, and became Amaranth.  I’ll say more about that tomorrow.