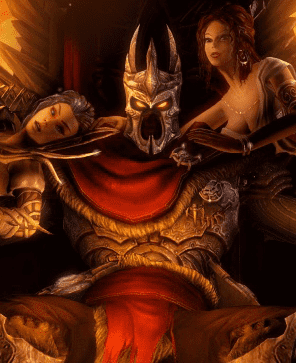 I’ve had Overlord 2 for a while, but hadn’t played it (as it lived at Girl’s house for some time). I recently borrowed it, and began playing it.  This isn’t strictly a First Impressions post, but I’m about that far into the game.

Girl and I played the first game fairly differently.  One of her favorite things to do was to farm the first villiage by going and killing everyone in it, and looting all the houses.  I, however, played without killing anyone.  I was going, both by predilection and GamerScore, for the achievement of being “good”.  She enjoyed the loot.

Overlord II promised a more evil morality system, where you were basically evil and it was more a question of how you were evil, not if you were.  Not being evil in the first game made some sense, after the reveal of the ending.  Being completely evil in this game also makes sense, given the prologue.

Fairly early in the game, you return to the town that ejected and rejected you. At first it’s unaccessible, controlled by the Empire, the primary enemy of the game. As soon as you get to the outskirts, you’re given a quick tutorial on the morality system.  You can dominate or destroy the villagers.  To destroy them you hit them with your magic spell until they die.  To dominate them you hit them with the spell until they start taking damage, and then you stop.  The latter converts them into a loyal follower/slave/whatever.  (Not minion, minions are something different.)

To teach how to do this, the game requires you to dominate three villagers, and then to destroy three.  It seemed to me, again, that dominating was the less evil decision, so I made that choice.  Part of this reasoning had to do with Girl’s dissatisfaction with destruction.  In Overlord I, the destroyed village repopulated itself. In Overlord II there’s persistence of state for your villagers.  Once you kill them, they are dead.  Once you dominate them, they are dominated — until you kill them.  My desire to keep things open, lent itself to the domination path.

Last night, I went to work on my quest to properly dominate Nordeberg.

I ran out of mana pretty quickly, as my first few attempts had villagers running from me.  I got a few done, however, a pitiful handful of villagers, and nowhere near the 100 I needed. I was tired, and stopped, and went back to my castle to save and take a break.

When I returned the villagers I had mastered were still dominated, and had sparky blue things around their head.  They worked at anvils, or digging mines.  I barely noticed it, though, as it really was only five or six.  I started doing the rest of the villagers, using my minions to trap them a bit, and zap them.  They started with a catty comment about how I had treated the first real villain (by dominating instead of killing him, as he’s largely useless).

That quickly changed to a “Thank you for sparing me!” or “Know that if I die, it will be in your service, Lord!”  The latter made me chuckle in Evony-inspired humor.  Later conversions offered to love me forever, or a promise to become a cog in my well oiled machine. I had gotten up to around a quarter of the remaining villagers — most of the ones walking around outside, and I saw something different than when I first arrived.

Villagers that walked around, did so hunched over.  They exclaimed, “I am so tired!”  There were a lot of people working in the mine and in the blacksmith. I picked up the money and equipped my minions and started in on the houses. When un-dominated villagers came out, I dominated them, and went to the next house.  Soon I had close to 50 villagers dominated — as many as I could find; there were sections of the town I couldn’t get to yet.

But the town was different. I mean, besides being on fire. It will filled with despondent people.

“Why didn’t you just kill me fast, instead of slow?” cried out one woman.

“I think I’m in love with you,” said another woman.

“I think I’ll just go in the corner and die,” said a man.

“We always knew you were one of us,” said another man.

Back and forth from despair to adulation. These were broken people, and I had broken them.  They shuffled about, working themselves to the bone, and they hated themselves.  But they loved me, or said they did (and the voice acting made me believe in it)

I started to think that maybe it would have been more merciful to have killed them.  I wasn’t sparing them, I was forcing them into my plans and by my power.  I felt actually evil.

I didn’t expect that from this game, honestly.  It was one of a couple of surprises (the other made me laugh.)  I’m looking forward to completing it, and yes, I plan to stay on this path to its no doubt bitter end.