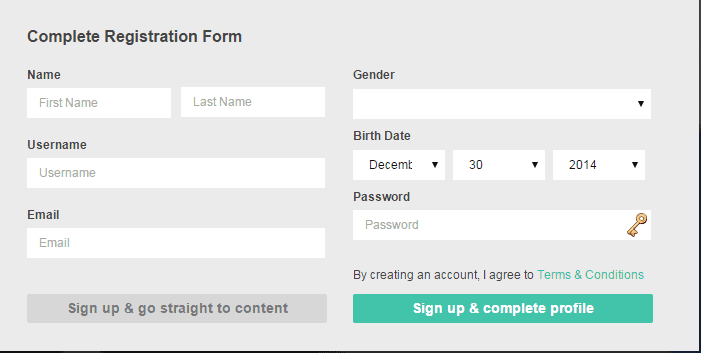 Last week (and then again today) I went to Tsu, the new social media hotness, to create an account.  I stopped when I got to this form to the right.  Actually I stopped when I got to the “Gender” drop down, and saw that 1) it’s a drop down, and 2) the only choices under it are “Male” and “Female”.  That’s the point that I closed my browser and forgot about Tsu until I saw someone else mentioning the link and I clicked on it again.

I do like setting things up on new social media, although I don’t use them much or at all (ello…?) But sometimes I just get stymied, and this is one of those times.  I’m probably not the only person who has problems with this form, or with entering data about themselves on a form somewhere.  It’s a personal peeve, and I’ve developed some best practices over the years.  It annoys me when people get this wrong — and I try to teach it to people I mentor.  Also, I just want to remind everyone that I’m a CIS white dude, so I probably don’t know all the ways I can screw up. I know a bunch of them, to help the people who make these kinds of forms do a better job, as most of them are also CIS white dudes.

RULE 1: Almost everything about a person is socially constructed.

_I want to say “everything”, but I’ve been a programmer too long to be sure.  _

Here’s what you can know for certain about a person who comes to your website: they are a person. (Let’s assume you know they aren’t some sort of automated tool.) It’s a good bed they have a birth date. Since it’s a website they came to, the probably have an email.   Emails, at least, are defined by an Internet RFC, so you’ve got a good chance of knowing what that data should be like.  Pretty much every other identifying piece of information on this screen has problems, and they’re only asking for 3 or 4 pieces!

Let’s start with the Name.  They’re asking for a first name and a last name. Even if someone fills that in, you really don’t know their name. Despite the privacy concerns of giving someone your real name, or full name, what’s a name anyway? Names are socially constructed — their order differs from culture to culture. In some cultures the family name goes first, in others it’s last.  I could go on, but what I know about names is: I don’t know all the ways names are constructed.  You really only have one good choice for names, and that’s to give people a simple text box to type in.  They can enter there what they want you to call them and what they want others to see.

The only reason I ever saw to split up names was so you could call people Mr. Tortuga just say “Joe” to be friendly. But if you don’t know which is the surname and which is familial, that is going to break.  If someone has some sort of complicated long name, what do you do? Text box.  Just let people manage it.  Also make it arbitrarily large. I tend to make it a TEXT even though I’ll never need that much space.  Who knows? Also you need to accept any unicode values into it that are available, and just deal with that as well. It won’t work for everyone, but it’s the best I know how to do.

Next up is Gender, and whooo boy.  If you want to ask someone for their gender the first question you’ve got to ask is: why?

It’s a serious question, why do you need to know that? My 1’s and 0’s are the same as anyone else’s, so why do you care?  Again, the only reason I’ve seen for this is to do market segmentation and prove things to your backers about usage. The thing is, if you’re building a global service then what gender means across cultures also changes. Even within the US there’s not really a consensus about gender.  Among the people I regularly hang out with, some are aggressively one gender or another, or no gender or something else entirely. Again, what I know about gender is that I don’t know enough about gender to make a radio button list or a drop down list for it.  Personally, I even have a problem with “won’t say” or “other” (For the latter, the people who aren’t “Male” or “Female” won’t thank you for reinforcing the Other-ness they get from the rest of society; you don’t need to add to it.)

Again, we’re talking about people, and what you don’t know about them.  When in doubt, it’s time for a text box.  Let people type what they want.  You can figure out the data on the back end (my understanding is it’s not that hard).

The thing is, people with normative genders, those of us who are clear on being “Male” or “Female” won’t ever notice that we had to type it in, and it won’t hurt our feelings (and who cares, we’re pretty privileged that way anyway).  The people who are used to being shut out of services because they ask an unanswerable question will appreciate it, and when  you have an internet service, buzz is good. Good buzz is better.

I don’t know who made this form, but it probably wasn’t given a lot of thought. Marketing people said, “we need this information to do market segmentation.” Or someone just thought this was the sort of stuff we need to know [One of the things that attracts me to TDD is that we don’t add things unless they have a purpose at the end — if we’re not using Gender anywhere, we just won’t even include it.]

Just remember RULE 1.  Everything you think you know about categorizing things, people, types of apples, shades of color: it’s all socially constructed.  You have learned what they are and how to discern them because of the culture you are in or were raised in.  But we live in a multicultural world, and there’s much you don’t know about others.  You don’t have to know everything, you just have to know you don’t know.  And make a text box for people to type in.