We played this game as a whim after seeing it in CABS’s cabinets.  It’s a time-travel/looping asymmetric puzzle game, where one player plays as an evil mastermind, and the other three players try to stop the mastermind’s scheme.  In normal play, to balance things, the players aren’t allowed to discuss anything except between loops.  In our version, their was only one player, which is a bit of an advantage.  However, a lot of the game depends on the players knowing what is possible, and since 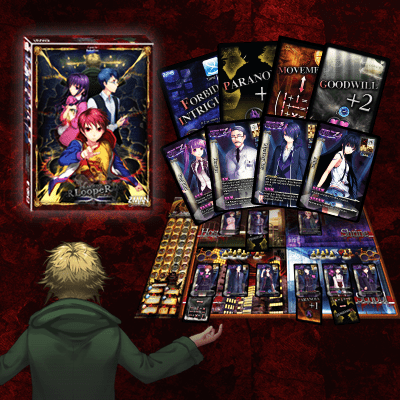 it was our first go at it, that advantage wasn’t there (and made it pretty hard for the player).

In the particular scenario we played, I was attempting to kill a specific character in the game.  There were two people who could do it, who were in the roles of the Serial killer and the Murderer.  Events could happen on certain days and under certain conditions. For example, the serial killer only killed if they were alone with one other character.   Other characters were there as decoys or confusion, and it could take two or three passes to figure out which characters were in which roles.

Knowing which characters do what, and what restrictions there are, and also which roles do what is key for understanding it.  [The players don’t know what roles are in play at first, and have to deduce them by their actions.  But then you need to kmow the palette of interactions that is possible.  That also gives the mastermind some ability to bluff, but only when that would be effective.

I really liked this game, but I was alone in that. It was a lot clearer to me,since I had all the information in front of me.  I hope to play it again,  but doubt we will. Still, getting to play this is why we go to  CABS.

Rock, Paper, Shotgun has a great review of the game