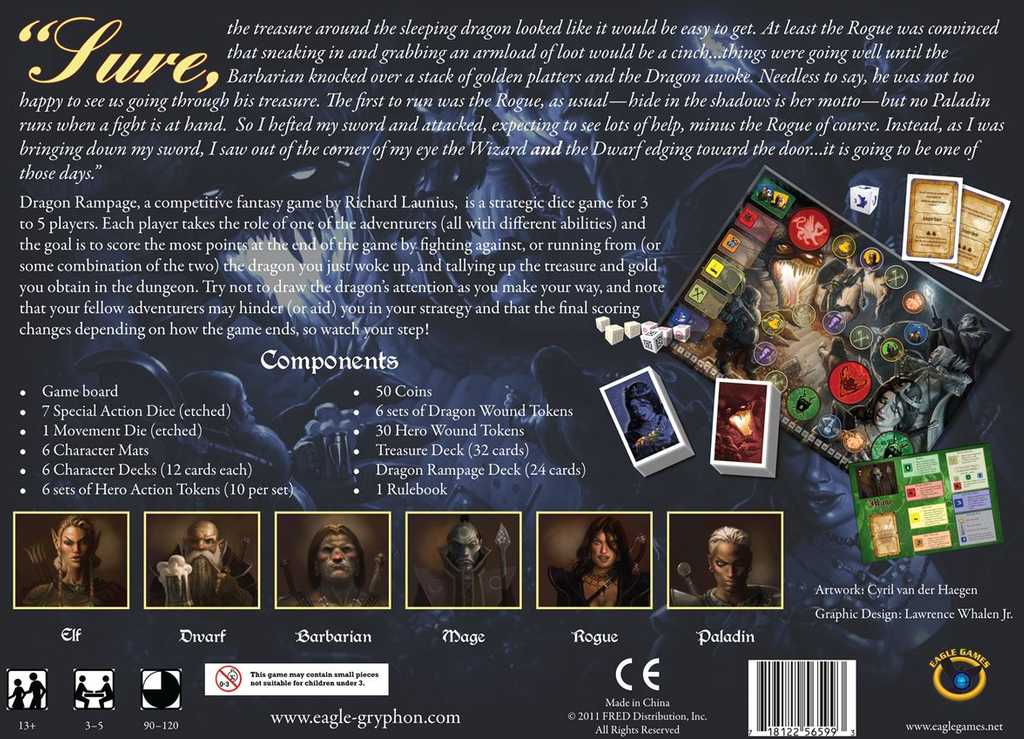 In Dragon Rampage (Board Game Geek), each player plays as the member of a party who, while exploring a dungeon, you accidently woke up the dragon when you were trying to get it’s treasure.  Players roll dice to determine which of several things they do on a turn — move towards the exit, attack the dragon, steal loot from each other, or try to slay the dragon.

This is a bit of a worker-placement style play (though not exactly) where say, only two people can get treasure, and only those who rolled the most treasure on the seven dice actually get to do that, so you can be bumped and not get to do that at all.  The game ends when someone slays the dragon, escapes the dungeon or dies. Players get points for damage done to the dragon, distance along the track, and treasures and gold they retrieved, with the number of points awarded dependent on how the game ends.

We played a four-person round of this on New Year’s Day, and got the game as a check out from CABS.

It wasn’t hard to play, and the dice kept things light and fun, despite this not being a really co-operative game.  My biggest complaint was that it was over so very quickly, with the death of the dragon.  We had no one come close to dying or the exit (we might have made it 1/4 around the very short track).  We even played the “long” game which gave the Dragon more health.  Looking at it’s BGG page this is a common complaint, and there are adjustments to the dragons which make the game more difficult or strategic.

The dragon needs to be hard to kill, or the other two outcomes (losing a party member/escaping) don’t become viable, and it all becomes about who can do the most damage to the dragon, which is how our game played out.  I may have won this game (I don’t remember), but I remember that it was a fairly unbalanced ending as well.

We liked it — the process of playing it was fun and pretty smooth. There weren’t a lot of detailed rules, until you got the scoring, which might have affected the outcome if we’d  understood it.  That’s not a particular problem if you play a game a few times.  We returned the game to CABS, but will probably play it again there. It’d be good between a couple of more complex games as a palette cleanser, as long as you had a tougher dragon to go against.

I doubt it’d stand up to many repeated plays, and won’t become part of our personal library.  That’s pretty typical of us, and why we have a CABS membership in the first place.